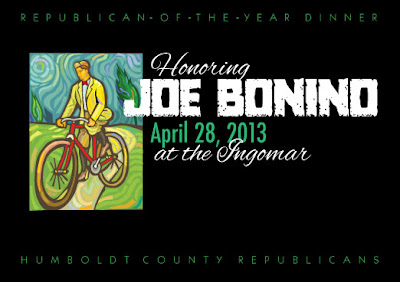 Bonino lost a close election for Eureka City Council last November. He was a member of the party’s Central Committee from 1996-2010, including several years as treasurer.

A Eureka resident since 1985, Bonino has been a volunteer with the Humane Socity of Humboldt County, the Clarke Museum, Easter Seals, Sons & Daughters of Italy and the City of Eureka’s Finance Advisory Committee.

Professionally, he has been with the Humboldt State Universtiy’s payroll departments since 1992.

According to Republican County Chairman Todd Walker, the party will also honor six Volunteers of the Year at the dinner. They are: Art Chase, Carole Del Biaggio, Michael Hutson, Fern Miller, Patricia Newell and Dean Nielsen. “They comprise the volunteer team that staffs our county headquarters month-in and month-out,” Walker said.

Invitations are in the mail for the dinner which will be held at the Ingomar Club.
CONFIRMATION: The date of the 2013 Republican-of-the-Year Dinner is SUNDAY, April 28th.