Establishment Now Publishing FAKE HEADLINES to Take Down Trump… They Are TERRIFIED! 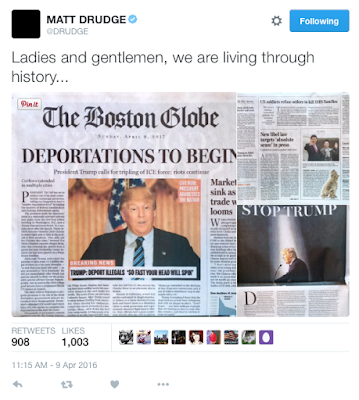 Ladies and gentlemen, we are living through history... pic.twitter.com/A56KmNOY4g

Police Shocked By Scale Of Islamic State Network in Europe

Why is @TerryMcAuliffe leaving domestic violence victims defenseless? #2A https://t.co/Tg3sRpjDNi

McAuliffe’s latest screw up (and assuredly not his last one) is the veto of Virginia House Bill 766, which would have granted immediate concealed carry permits to victims of domestic violence with the issue of a protective order.
at 10:30 AM

Beginning in 1478, the Spanish Inquisition systematically silenced any citizen who held views that did not align with the king’s. Using the powerful arm of the government, the grand inquisitor, Tomas de Torquemada, and his henchmen sought out all those who held religious, scientific, or moral views that conflicted with the monarch’s, punishing the “heretics” with jail sentences; property confiscation; fines; and in severe cases, torture and execution.

One of the lasting results of the Spanish Inquisition was a stifling of speech, thought, and scientific debate throughout Spain. By treating one set of scientific views as absolute, infallible, and above critique, Spain silenced many brilliant individuals and stopped the development of new ideas and technological innovations. Spain became a scientific backwater.

As an old adage says, those who cannot remember the past are condemned to repeat it. So we now have a new inquisition underway in America in the 21st century—something that would have seemed unimaginable not too long ago.

Treating climate change as an absolute, unassailable fact, instead of what it is—an unproven, controversial scientific theory—a group of state attorneys general have announced that they will be targeting any companies that challenge the catastrophic climate change religion.....

"Others call these junkets a form of legalized bribery. They are designed to allow special interest lobbyists to have exclusive call on lawmakers’ attention, against which the officials’ small fry constituents cannot afford to compete."

Are junkets a form of legalized bribery? https://t.co/9CLx56HwKr #CAPolitics #AB2840

THE STORY BEHIND 'PANAMA PAPERS' LEAK...

What's in the Panama Papers?
Who is implicated?
What comes next?
What you need to know https://t.co/QtfB5dTo4X pic.twitter.com/3mxI430OLN

CRUZ: People are looking for REAL SOLUTIONS, not someone to yell, scream and curse at them https://t.co/RlxyPf3drK pic.twitter.com/iLwfpgySt2

GOP Uses Democrats’ Words Against Them Over Supreme Court Hearings

The video showed clips of several prominent Democrats arguing that hearings should not be held for presidential nominees. At the time all of the quotes were said, a Republican president was in the White House.

“President [George H.W.] Bush should consider following the practice of a majority of his predecessors and not, and not name a nominee until after the November election is completed,” then-Sen. Joe Biden said in 1992.

“I believe this is one of the most important roles that the Senate plays. This, after all, is in the Constitution. We are asked to give advice and consent or to deny advice and consent,” then-Sen. Hillary Clinton said in 2005.

“Duties of a United States Senator set forth in the Constitution of the United States, nowhere in that document does it say the Senate has a duty to give presidential nominees a vote,” then-Senate Minority Leader Harry Reid (D., Nev.) said in 2005.

“Let me say this, we should reverse the presumption of confirmation,” Sen. Chuck Schumer (D., N.Y.), who is expected to succeed Reid in 2017 as the Senate Democratic leader, said in 2007.

Wisconsin: Serious Danger for Trump: Establishment pulls out all the stops to guarantee a Cruz victory https://t.co/lvxaFT5Dt7 @LifeZette

Cruz Will Be Knocked Out of Delegate Race By April 26 -- Even If He Wins WI! https://t.co/txxv2K2WnA

Carson: GOP 'willing to throw the election' to have Clinton beat Trump https://t.co/ad05ZuDRTT via @DCExaminer pic.twitter.com/SS0iLlbMZe

TRUMP: 'THEY WANT TO KNOCK OUT THE OUTSIDER. THEY WANT TO KEEP THEIR LITTLE PARTY GOING'... https://t.co/Pn2gtf9LZy

(3/4) So GOP will end up with a decent Cruz-Fiorina ticket. Meanwhile, Clinton has been weakened by Sanders, with FBI still to weigh in.

(4/5) So Cruz-Fiorina emerge as a strong consensus conservative ticket; Democrats divided on whether to dump Clinton or not. Synthesis:

CLICK THE BEAR FOR THE MOST RECENT RECALL UPDATES!