“I no longer think the Democratic party is the party of JFK. This is a radical, radical party w/ radical ideas”

“I no longer think the Democratic party is the party of JFK. This is a radical, radical party w/ radical ideas.” -@EricTrump pic.twitter.com/GVmxY6o2Oe

Democrats have an ENTHUSIASM problem!

“There were empty seats there…this does not look like an energized party.” #FITN pic.twitter.com/UcKGwNMSkS

"People ought to go to jail"

"People ought to go to jail," says @SteveScalise after viewing classified information related to the Durham investigation.

"“The failures highlighted in that report are unacceptable — period."https://t.co/9HmFpT6Dqk

GOP HQ in Eureka vandalized again (for the 6th time), suspect in custody this time. UPDATE

We were vandalized again today, a substance was poured into the office and police believe he was trying to set the office on fire. Thank you, Eureka Police for the quick response and capture of the suspect. The suspect threw his bicycle at officers and to no ones surprise he had a Bernie Sanders sticker on his bike. We have great video and the suspect is in custody

If you're interested in donating so we can get more advanced secure windows our address is:
Humboldt Republican Party
PO Box 682
Eureka, Ca 95502-0682

(Video) Humboldt Republican Headquarters Vandalized Early Saturday Morning. “This is the sixth time this has happened to us in the last two years” https://t.co/E6oI9LQ7El 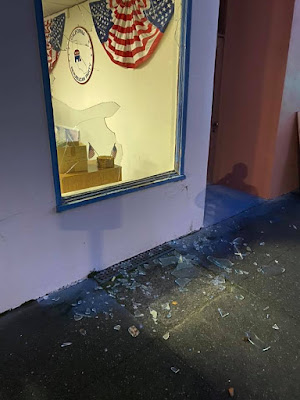 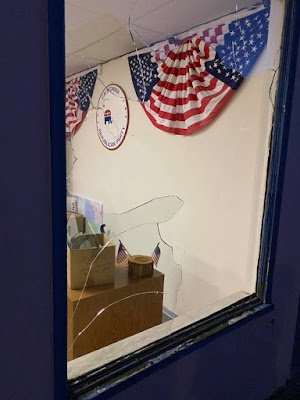 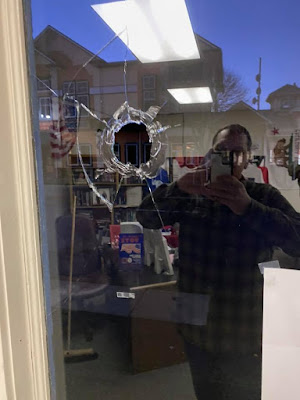 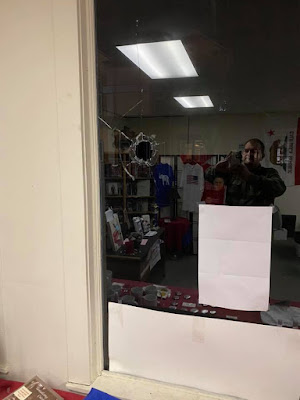 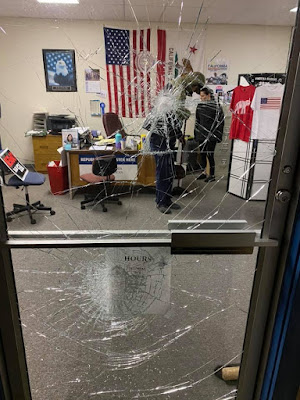 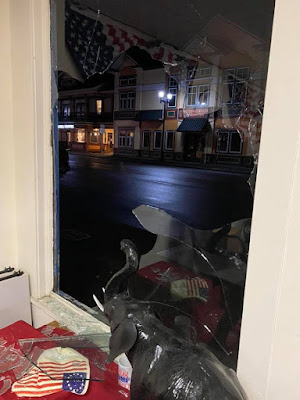 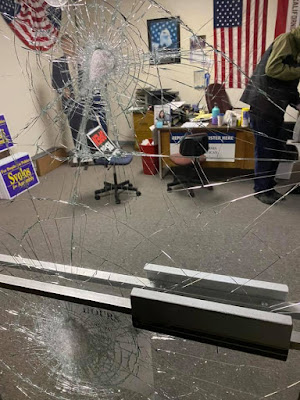 GOP HQ in Eureka vandalized again (6th time), suspect in custody: suspect threw his bicycle at officers, had a Bernie Sanders sticker on his bike. Substance poured into the office, looks like he was trying to set the office on fire. https://t.co/vlZndOoow1
— Humboldt GOP (@humboldtgop) February 8, 2020

It's not just us:

We stand by our friends who were simply exercising Constitutional rights supporting @realDonaldTrump & GOP.

This is reckless intimidation & someone could have easily been killed.

Duval County GOP will not be silenced nor will Trump supporters anywhere! https://t.co/HDH0q1enFT

Preventing coronavirus from becoming an epidemic in America will require drastic changes from the Chinese Communist Party, whose secrecy and paranoia are responsible for its rapid growth. https://t.co/dJVJZuaNEb

My piece in the @FDRLST on the #CoronarivusOutbreak and how supply chains might shift out of #China as a result. https://t.co/piaaVTUyNs @TPPF

Coronavirus fears took a back seat to marital bliss in South Korea on Friday as nearly 6,000 couples from 64 countries -- some wearing face masks -- tied the knot in a mass Unification Church wedding. ⁣ ⁣South Korea has recorded 24 cases of coronavirus, which emerged in neighboring China, where more than 31,000 cases have been confirmed after first emerging in the city of Wuhan.

The Corona Epidemic – A Dangerous and a Less Dangerous Form https://t.co/Uwg9DvBJa6 pic.twitter.com/hSmrkA02sx

What happens if/when 10%+ of China’s subjects are culled by their #CoronaVirus?https://t.co/9Hk7ozRdAC

Looks like they’re getting rid of sick people in China https://t.co/psX24cgOc3

We lost a member of the Breitbart family last night

⬛️ We lost a member of the Breitbart family last night, legendary actor-comedian Orson Bean — father-in-law of the late Andrew Breitbart. In his last interview with the celebrated actor, Breitbart News editor-in-chief Alex Marlow said that the news company that Andrew built would not have been possible without Orson Bean. We will have continuing coverage and tributes in the coming days at Breitbart.com.⬛️

Opportunity Zones are a powerful vehicle for economic growth and JOBS in American communities that need them most!

Together, we’re bringing opportunity back to the places that need it most. 🇺🇸

Great to be in Charlotte, North Carolina as we expand and grow this unprecedented economic momentum. Today, we launched a brand new nationwide campaign to revitalize under-served cities and towns across America – it’s called OPPORTUNITY NOW! https://t.co/jh2Ve6BUtJ

After years building up other countries, we are finally rebuilding OUR Country. From our inner cities to our rural communities, the forgotten men and women of America are forgotten NO LONGER! #OpportunityNow pic.twitter.com/qShbwaCaPd

The President invited Tony Rankins to share his story of hope— and how an opportunity zone in Cincinnati has given him a second chance. pic.twitter.com/k6R3d0sCAe

Once again it looks like California has moved up its primary to Super Tuesday at exactly the wrong time. We did this in 2008, and ended up being an afterthought. It could be even worse for California Democrats in 2020, because it looks like a long slog to the Democratic nomination in July, and California will not be able to play its once traditional clean-up role.

Even worse, California could very well make the Iowa caucuses look like the model of efficiency. Because of our extremely liberal voting laws, it will take all of March to count the final ballots, and until that is done, no one will be able to figure out exactly who gets the California national convention delegates. California’s Democratic delegate rules are all but incomprehensible, and with incomplete returns, there will be no way to figure out who the ultimate winners are.

CARVILLE to NYT WRITER: ‘Do You Know How F***ing Patronizing That is to People in the South?’ https://t.co/Jp27Zu9PvE

🔹 James Carville: "There’s a certain part of the Democratic Party that wants us to be a cult. I’m not interested in being in a cult.”🔸

"Eighteen percent of the population controls 52 Senate seats,” Carville said. “We’ve got to be a majoritarian party. The urban core is not gonna get it done. What we need is power! Do you understand? That’s what this is about." https://t.co/HsXUygrd5i

“We’re losing our damn minds”: James Carville unloads: "We can’t win the Senate by looking down at people. The Democratic Party has to drive a narrative that doesn’t give off vapors that we’re smarter than everyone or culturally arrogant." https://t.co/AUoM9vNKrF

James Carville spitting fire: "Here’s another stupid thing: Dem talking about free college tuition.... people all over this country worked their way through school, sent their kids to school, paid off student loans. They don’t want to hear this shit." https://t.co/uJqgcMHtH2

If James Carville represents the sane wing, you can imagine what the crazy faction sounds like pic.twitter.com/KPE6Gn8nos

Not a single Democrat will openly denounce socialism or a socialist candidate.

The Democrats seem ready to stop pretending that they respect the democratic process and reveal themselves to the public as full-grown Bolsheviks.https://t.co/U4fr8Vkkuh pic.twitter.com/rNNHmdOVRc

It's hilarious to watch self-appointed Democrat bellwethers like James Carville and Chris Matthews sound the alarm on their party's extremism.
They slumbered through the journey and suddenly woke up to find themselves passengers on a clown car headed to the wrong destination.

WHY do we post links to so many articles on the exact same story? So you can see the different reports, connect with the different news outlets, get engaged in commenting on the news, let your voice be heard on friendly and unfriendly media. Enjoy.
at 10:00 AM

A bipartisan group of U.S. lawmakers has nominated Hong Kong’s Pro-Democracy Movement for the Nobel Peace Prize of 2020

A bipartisan group of U.S. lawmakers has nominated Hong Kong’s Pro-Democracy Movement for the Nobel Peace Prize of 2020 to recognize the “countless and often anonymous individuals [who] risked their lives, their health, their jobs, and their education to support a better future for Hong Kong.”⠀ ⠀ “This prize would honor the millions of people in Hong Kong whose bravery and determination have inspired the world,” the lawmakers told the Nobel Peace Prize Committee in a letter published on Feb. 4.⠀ ⠀ Read: https://ept.ms/2va3MAh⠀ Subscribe: https://ept.ms/Subscribe⠀ ⠀ Get one month FREE FULL ACCESS to Epoch Digital. ⠀ Sign up here: https://ept.ms/FreeMonth (no credit card needed)⠀ ⠀ GET THE APP:⠀ iPhone - https://ept.ms/ETAppiPhone⠀ Android - https://ept.ms/ETAppAndroid

Scientists have discovered a black fungi living inside the Chernobyl nuclear reactor that feeds on radiation. Researchers realized that not only was the fungi impervious to the deadly radiation, it seemed to be attracted to it. Some of the tested fungi had a large amount of the pigment melanin, which is also found in the skin of humans, among other places.

Poverty hit the lowest level since 2001, and the number of people in poverty fell by nearly 2.5 million in his first 2 years.

Women and Black and Hispanic Americans are being lifted out of poverty! #DemDebate

It's amazing how Democrats, like Buttigieg, are trying to argue that Trump is lying that the economy isn't strong, when the American public in poll after poll is reporting record, or near-record, happiness about the economy and their financial wellbeing. pic.twitter.com/eD0yExWnzm

Great to be in Charlotte, North Carolina as we expand and grow this unprecedented economic momentum. Today, we launched a brand new nationwide campaign to revitalize under-served cities and towns across America – it’s called OPPORTUNITY NOW!

CLICK THE BEAR FOR THE MOST RECENT RECALL UPDATES!