Beautiful singing of the National Anthem!pic.twitter.com/Fw4dwdT8Q6"

Liberals, and their media acolytes, thought we were going to go away.
That was a catastrophic miscalculation. https://t.co/x60VGTIAtC

It has to be puzzling for Dems to see a protest that doesn't involve looting and setting buildings on fire.

Once again, leftist fascists instigate violence. This time, at a pro-Trump demonstration.

Will Joe Biden condemn them and the left’s constant attacks on free speech?

This shouldn’t be allowed to continue.

Thank you to all the patriots who came out to show your support for @realDonaldTrump and election integrity! pic.twitter.com/ke37WvxCrt

Hundreds of thousands of people showing their support in D.C. They will not stand for a Rigged and Corrupt Election! https://t.co/tr35WKTKM8

DC: Thousands of Trump Supporters continue to descend upon Freedom Plaza chanting “USA” for the “Stop the Steal” March and Rally in support of President

DC: Thousands of Trump Supporters continue to descend upon Freedom Plaza chanting “USA” for the “Stop the Steal” March and Rally in support of President @realDonaldTrump pic.twitter.com/ILRDeKfcvu

3. unlike the woman's march there aren't national organizations or PACS picking up the bills for large organized groups

4. finally for many on the left protesting and organizing is their living, these folks are doing this in their spare time

This type of absurd and malicious headline shows both why the media have no sway whatsoever over half of the country but also that Big Media is no longer bothering to pretend to be anything other than agitprop. pic.twitter.com/VOx56NcpD8

We threw a party called #MarchForTrump and the President came!

We love you, Mr. President!

The TRUTH is: The election outcome is unclear amid pending recounts and legal challenges. Astoundingly, the media is claiming that is untrue.

Note: Social Media is censoring conservatives, and anyone who questions the media's claims about the election. The ABOVE post on instagram was censored. BELOW is the screenshot of the post before it was removed. Orwell lives. Social Media is Big Brother. It is a horrible state of affairs. 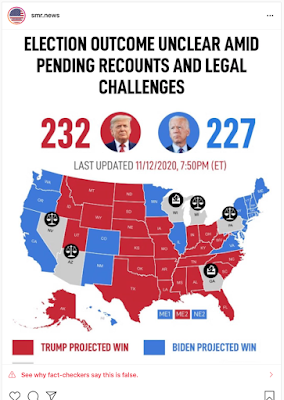 If they aren't worried about illicit ballots unmasked by signature matches, then why are they so scared to allow anyone to check signatures? https://t.co/j2DGLIWJdg

We need to hear them out. https://t.co/fFcx9HhdNX

Watch the voting machine used in US swing states get hacked to rig an election. @Jhalderm, @UMich, and @nytimes demonstrate why every voting district needs an auditable paper ballot. Voting machines are *known* to be insecure. https://t.co/juvU7K3Qdl pic.twitter.com/prsrOGK17z

Edward Snowden: Watch the voting machine used in US swing states get hacked to rig an election. @Jhalderm, @UMich, and @nytimes demonstrate why every voting district needs an auditable paper ballot. Voting machines are *known* to be insecure.
at 8:13 AM

"We are not a people of perpetual war -- it is the antithesis of everything for which we stand and for which our ancestors fought. All wars must end."

"We are not a people of perpetual war -- it is the antithesis of everything for which we stand and for which our ancestors fought. All wars must end.

Ending wars requires compromise and partnership. We met the challenge; we gave it our all. Now it's time to come home." https://t.co/YDTeLR2wom

"Donald Trump is, and has always been, a living indictment of the people who run this country.

Trump rose because They failed."#MarchForTrump & Defend the Republic

What do you know about Dominion, Smartmatic and Scytl? Who is Skytl? It's possible that 2020's election fraud is way bigger than we thought. Ok, Dominion and Heart are the machines, HAMMER and Scoreboard are programs that run within computer. Spain based SCYTL ANNUALIZED data...

Release the Kraken: @SidneyPowell1 vows to expose the Silicon Valley and left-wing corporations that are using their power to help Democrats steal the election from @realDonaldTrump. #MAGA #AmericaFirst #Dobbs pic.twitter.com/EPJSfUZqM2

You're probably asking yourself...

Who is Skytl?
Why is a Spanish company counting US votes in Germany?
Isn't this company bankrupt?
Are they involved with fraud in other elections?

Kudos to @GreatGameIndia for a good article on this shady company.https://t.co/H5uTM0ABk6

"An injection of over 1.5 million euros from Spain’s Ministry for Industry was, according to [sik] Republik, used for, among other things, a «product demo» for Neuchâtel. And 900’000 euros were spent on the development of software modules for Ecuadorian election authorities."

Even after $1.9M in upgrades the iVote system was vulnerable to "Security Failures and Verification Flaws in a Live Online Election" https://t.co/8mooFzgJQF

Switzerland partnered with Scytl to develop an e-voting system in 2015. https://t.co/HRaWc4mHaZ

The researchers concluded that these vulnerabilities would allow the system’s operator to ALTER VOTES UNDETECTED. They found backdoors is Scytl software.

On June 2, 2020 it was all over and bankruptcy was finalized in a spanish court. https://t.co/qHFRF2vDSd

UPDATE: For those asking, this was recorded last night (11/12/2020) when Mr Gohmert was a guest on an online prayer meeting where people gathered to pray about the election.

Wow @newsmax is on this story (video from @Tyrael2020)

Dallas cybersecurity firm claims to detect malware called QSnatch on the servers that collects the credentials of county workers and uses this to make changes to the vote. https://t.co/DwCtf4Qtdb

According to a @wikileaks drop, the CIA has a remote hacking base in (drumroll please........)

WikiLeaks reported that the group developed trojans and other malicious software in the American Consulate General Office, the largest US consulate in the world. pic.twitter.com/DUErP5vCaP

BREAKING EXCLUSIVE: Analysis of Election Night Data from All States Shows MILLIONS OF VOTES Either Switched from President Trump to Biden or Were Lost -- Using Dominion and Other Systems https://t.co/pBoCNeDL3X via @gatewaypundit

Biden & his criminal cronies are not going to sleep well tonight. Well, Biden might because he probably forgot the name Scytl.

His co-conspirators know name well. They also know the name Paragon, company which purchased Scytl in 10/20.

The Spanish company Scytl was bought in October by an Irish group called Paragon. https://t.co/7LiM11T0g8

Good article on SCYTL, the company in question. They went bankrupt in June of this year...why are they counting our votes???https://t.co/QdcneATHHC

BREAKING | People on the ground in #Germany report that #Scytl, hosting YOUR elections data Improperly through… https://t.co/qO4W7aKXqc via @NewsAlternative

Votes go Scytl servers in Frankfurt Germany. Those servers have a "bug" (i.e. malware) which scans Central Counting for internet credentials. It gives the servers and those 4 in the center the ability to change vote counts at central. Official/Unofficial is same thing. pic.twitter.com/7dt2gyragD

By getting ahold of the server they now are going to have direct evidence of when they were instructed to stop counting. They will also discover who gave the direction to stop counting and who initiated the algorithm that started switching votes. https://t.co/BRMefuUaTk

If this is real, then this is a huge bomb https://t.co/30hrNCkiMu

Thread by @AOECOIN: #Breaking #BreakingNews 🚨💥🚨💥 People on the ground in #Germany report that #Scytl, hosting YOUR elections data Improperly through #Spain, was raided by a large #USARMY force https://t.co/ZK7KndpEpr

These states in question should immediately be put in the Trump Win column. Biden did not win, he lost by a lot! pic.twitter.com/ywiw6sPicI https://t.co/C1g9LZpMah

Ok, Dominion and Heart are the machines, HAMMER and Scoreboard are programs that run within computer. Spain based SCYTL ANNUALIZED data...

SPECIAL THANKS to The New York Times for Accidentally Providing the Data that Will Bring Down Biden and CRACK THE BIGGEST VOTE FRAUD IN HISTORY https://t.co/49rNQso1oL via @gatewaypundit

The pause in counting is evidence of fraud and should result in the rejection by state legislatures of the tainted results. https://t.co/tgLOvOp3ti

They added millions of the most suspect type of ballots that require at a minimum signature checks and postmark confirmations then stripped those basic qualifying confirmations, counted the ballots in secret and now want everyone to agree that the winner of the election is clear.

Dominion Voting Systems Officer of Strategy and SECURITY Eric Coomer Admitted in 2016 Vendors and Election Officials Have Access to Manipulate the Vote (Video) via @gatewaypundit https://t.co/nQqziZSrMt

HUGE--> Lin Wood on Howie Carr: "Joe Biden and the People Like Him Who Have Been Trying to Steal This Election - Will All Go to Jail" (VIDEO) @LLinWood @HowieCarrShow via @gatewaypundit https://t.co/0HaRnSQC2Q

Dominion Voting Systems: Toronto based @dominionvoting was rejected by Texas Secretary of State in 2019 for major flaws in their software. Why was it used this election in 6 battleground states and 22 others? #MAGA #AmericaFirst #Dobbs pic.twitter.com/5QYBspy8VA

Lookie here. Seems @SenWarren @amyklobuchar and another other democrat, in 2019, complained about #DominionVotingSystem “vote switching!” 👇🏼👇🏼👇🏼 pic.twitter.com/wf81gU5Vnn

Trump lawyer, America’s Mayor @RudyGiuliani has an affidavit from a Dominion worker in Michigan that 100,000 ballots for Biden were brought in the back door so they could “catch up with Trump."
Goes on to say the affidavit can be corroborated by 3+ peoplepic.twitter.com/iVzTDVzzM0