Liability protections essential for small businesses should be in coronavirus compromise

One point of contention between the two parties seems to be liability protections for businesses from COVID-related lawsuits.

It's unfortunate a policy that could make a difference for small businesses is not unanimously supported, writes @MattMackowiak.https://t.co/bOFZ57kU4B

...It is unfortunate that a policy that could make such a critical difference for small businesses across the country is not unanimously supported.

It's unquestionable that small businesses are suffering badly. CNN recently reported that 10,000 restaurants in the United States are expected to close, and 17% of the total restaurants in the country have closed already. Temporary closures are becoming permanent. Some businesses are even resorting to establishing GoFundMe pages in hopes of collecting enough donations to survive. While these statistics make clear how small businesses are struggling, it is impossible to quantify the damage done to the families who have spent generations of hard work to build a successful business. Or the entrepreneurs who took the risk to create something for themselves, only to have it all torn out from underneath them due to no fault of their own....

At the very least, Congress could provide businesses with the assurance that they will not be forced to close their doors due to fighting costly, frivolous lawsuits. And reasonable liability protections could provide them that. These protections should be for those businesses who implemented precautions that keep their employees and customers safe and who worked hard to abide by constantly changing local, state, and federal regulations.

No one is asking for bad actors to be protected, but businesses that are working hard to protect their customers and employees while trying to stay afloat deserve the certainty of knowing that an unfounded lawsuit won’t put them out of business for good. Leaders of both parties, including Sens. Chuck Schumer and Mitch McConnell and Reps. Nancy Pelosi and Kevin McCarthy, need to come together and get this done.
at 4:52 PM

Other countries are now reporting on Joe’s obvious dementia

Our media pushed a demented racist for President–and now the entire world is laughing at us. pic.twitter.com/vW7HgS8mwG

Biden is so popular that every video the White House YouTube channel uploads of him gets 4x more dislikes than likes.
And comments are turned off.

We originally broke this story on cable news this week. The video wasn’t just “embarrassing,” it was disgraceful. “Entire Oakley school board resigns....” https://t.co/RNuyPRcTwi via @mercnews

Members of a California School Board were caught on video mocking parents for wanting classes to reopen.

You should see their reaction when they realize their meeting is public. https://t.co/hpWWLqmZGT

Members of a school board in California came under fire after they were caught making comments about parents during a virtual meeting. They said they didn’t realize the parents were logged on and heard everything they said. @KathyParkNBC has the details. pic.twitter.com/GiwUJUBjjF

Parents in Oakley are now calling for the school board to resign or be recalled after hearing what board members said in a zoom meeting- that they thought was private. One member talks about how she will F%&* up parents who criticize the board.

...Yes, let’s be clear and accurate in our description of the COVID-19 vaccines. They are wholly experimental treatments manufactured and marketed by multinational corporations that are immune from liability for their products being tested, approved and distributed at warp speed. An important white paper by America’s Frontline Doctors reminds citizens that COVID-19 vaccines manufactured by Pfizer, Moderna and AstraZeneca are considered “investigational” in status and fall under legal standards for experimental medications. The trials are ongoing and enrollees are tracked for at least the next two years. “We do not know the effect on the pregnant or soon to be pregnant,” Gold and her colleagues report. “There is no actual data at all for an enormous percentage of the population, probably more than half.”

On top of all that uncertainty and lack of data, the “mechanism of action of the experimental mRNA vaccines includes a possible auto-immune rejection of the placenta. In layman’s terms, the vaccine may permanently interfere with a woman’s ability to maintain a pregnancy.” In fact, as the labeling on COVID-19 vaccine vials itself acknowledges: “(I)t is unknown whether COVID-19 mRNA VaccineBNT162b2 has an impact on fertility. And women of childbearing age are advised to avoid pregnancy for at least two months after their second dose.”

Nevertheless, Dr. Anthony Fauci is now downplaying the risks of COVID-19 jab complications in pregnant women and claims there are “no red flags...”
at 12:52 PM

Not much holds Biden's coalition together now that Trump is gone.

Rush Limbaugh was one of the finest human beings that you would ever want to meet. A generous, wonderful, beautiful spirit, humble, a gentleman, always...”

A Rush of Emotion, the Loss of a Friend. https://t.co/ZI4q3qWDRn

Poland spent 45 years under communism... it taught us the value of free speech

Did Nancy Pelosi refuse security for the Capitol on January 6 because she knew what was coming, and wanted to put the blame on Trump? @SpeakerPelosi pic.twitter.com/NHhndmhjVo

.@JoeNBC says the Capitol takeover of January 6 is a terrorist act akin to 9/11, far worse than anything Antifa or BLM ever did. Here I expose his bogus moral reasoning.

Gavin Newsom has a strategy to ensure there’s no recall vote.

You’ve never seen signature verification like they are about to do in California. @Steve_Glazer is considered a moderate and he’s saying everyone is focused on reducing the number of signatures. @GavinNewsom has a strategy to ensure there’s no recall vote.

...The petition “Rescue California” has gathered over 1.5 million signatures, enough to qualify to put his recall up for a vote; but the State of California is poised to go into overdrive to throw out signatures that do not match exactly.

Local NBC affiliate KCRA 3 provides a stunning update on the number of votes that have qualified thus far:

On Tuesday, KCRA 3 called each of the 58 county registrar’s offices. We heard back from 45 of them. Based on KCRA 3’s independent reporting, as of Wednesday, a total of 1,020,165 signatures had been submitted. However, only 560,364 are valid.

It’s important to note: KCRA 3 did not get current totals from some large counties like Los Angeles County. We can anticipate the total number of valid signatures to increase.

The effort needs more than 1.4 million signatures to get the recall petition on the ballot. Signatures can be submitted until March 17.


If the rate of 55% conversion does not increase, it would represent a major boondoggle.

California’s suddenly renewed interest in strict signature-matching when it comes to the Newsom recall petition contrasts with its comparatively low 0.6% ballot rejection rate in the 2020 election:...

(Grenell said:) “The state of California is controlled by a whole bunch of Democrats. One-party rule, they are going to go through every single signature we have and throw out ones. The verification process is going to be unlike anything we’ve ever seen,” Grenell said. “We still have a long way to go to gather signatures to put this on the ballot because they are going to play games. They already are. So I would just say we got to keep focused on getting rid of Gavin Newsom.

EVERYONE: We have over 1.5 mill raw signatures but they are not all verified. My message is that 1.5m sounds great but is NOT ENOUGH. To ensure qualification we need 1.9 million. https://t.co/AagEb5mh6v https://t.co/nwN1JOxL5I 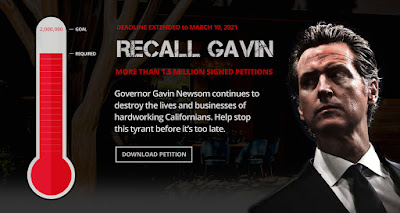 OFFICIAL RECALL PETITION: (recallgavin2020.com)
You can mail the petition in according to the instructions or drop off at:

You can also SIGN THE PETITION at our office, or pick up copies to get friends to sign. Our Office is open 10:00 - 1:00 Monday through Saturday
at 7:00 AM